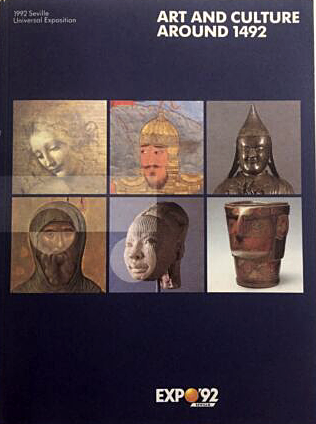 Art and Culture Around 1492

[…] An and Culture Around 1492 also seeks to show this; the existence of a common beauty, whether beauty is considered more as the fruit of an emotional process or an intellectual one, whether it is understood that beauty should not be sought outside things but within the things themselves, in the aptness of these to their function and in the shape which their essence demands. The thought expressed by the Sufi al-Gazzali in his treatise on the regeneration of religious sciences would be valid for all cultures: "Beauty does not lie within the perceptions of sight, nor in physiognomical harmony, nor in the mixture of white with red; we say: this a is a nice piece of penmanship and that is a nice voice, and this is a beautiful horse; but we also say that this fabric is lovely and that cup is beautiful; so where does the meaning lie in the beauty of the voice, of the penmanship and the rest of the things, if not in their very form?" In Art and Culture Around 1492shape and form are understood as much in terms of their functional character, whether primary or symbolic, as in that of their beauty. This allows Shen Shou's landscapes to be compared with Leonardo da Vinci's portraits, African household articles with Islamic geometric arrangements. Even this last opposition, however, that of utility vs. abstract form, is more apparent than real. If it is true, for example, that a Muslim's conception of supreme beauty had to be the fruit of rational perception rather than of a sensual nature, it is also true that this man had to be capable of finding beauty in the things of this world, which, though transient, all aspire to the wholeness of the sublime[…]. (Joan Sureda, de «Art and Culture Around 1492.The Exhibition»)