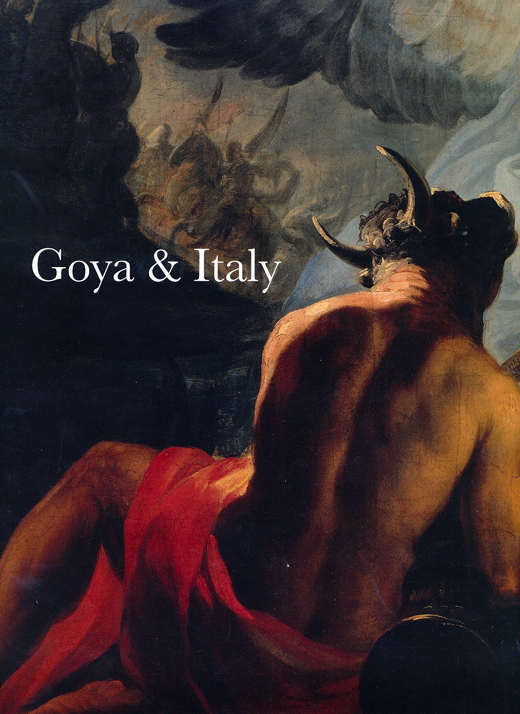 « Goya & Italy: Hannibal to Los Caprichos», pp.17-22; « From Zaragoza to Rome», p. 27; «Rome», p. 41; « Learning in Rome», p. 61; « Roman Worlds », p. 81; «Goya and Rome», p. 93; « The Italian Notebook », p.103; «Parma», p. 114; «Zaragoza, ritorno in patria», p. 135; «Madrid, City and y Court», p. 143; «Arcadia», p.159; « Adverses Natures », p. 173; «Portraiture», p. 179; « Classical and Religious » p. 197; « Dreams and Monsters », p. 205; «The Poetic Dream of Death », p. 233. ....................................................................................................................... Goya and Italy shows all the grandeur and genius of Francisco de Goya's creative universe from I 770-177l--when he submitted his Victorious Hannibal to the painting contest of the Reale Accademia di Belle Arti di Parma-to 1799, when his Caprichos were published. This universe was forged in Zaragoza and Madrid, but most of all in Rome, the caput mundi during the second half of the eighteenth century There, the Roman-Neapolitan barocchetto was fading, and the taste for archeological classicism was on the rise, as was the art of dream states, the imagination and inner fantasies. Along with paintings, drawings, engravings and tapestries by Goya, the exhibition presents works by relevant artists such as Mengs, Fuseli, Piranesi, Abildgaard, Kuntz, Baldrighi, Luca Giordano, Corrado Giaquinto, David, Batoni, Tiepolo, Traversi, Angelica Kauffmann, Canova, Ingres and Fragonard-up to 118 artists and 360 works, presented with extreme conceptual and visual richness. ------------------------------------------------------------------------------------- The works from Francisco de Goya's mature period (Fuendetodos March 30th, 1746 - Bordeaux April 16th ,1828)1 are an essential part of the collective imagery of modernity. His portraits and self-portraits, the murals in Madrid's hermitage of San Antonio de la Florida, The Family of Carlos IV, The Charge of the Mamelukes, The Shootings qf May 3rd and the Majas, as well as his series of engravings-the Caprichos, Disasters of War, Tauromaquia and Disparates-and his so-called 'black paintings,' have become emblematic icons of an art that ceased being a mirror of the Ancien Regime's trappings, or even of the human reason exalted by the Enlightenment, with the advent of the French Revolution and the beginning of the Industrial Revolution. Instead, art became the critical image of obsolete powers and of a dehumanized, chaotic and shapeless society whose heroes were anonymous people, antiheroes, or simply the poor. At the end of the eighteenth and beginning of the nineteenth century, Goya was one of the few painters capable of expressing the spirit of a rough, grotesque, violent and sometimes even brutal epoch. The deafening and painful birth of a new age was marked by a debate between the claustrophobic and tenebrous weight of the past-barely illuminated by the Century of Light-and the even more amorphous and unforeseeable future. The paintings and prints that capture the tribal ruin of that period, all of which feed on the collective and individual memory of events in which the wounds of daily life disappeared in the general convulsion, offered horrifying testimony against that moment's historical destiny. Their intense expressiveness and unquestionably revolutionary and innovative visual character immediately thrust Goya's lifeand art into the thick romantic net of praise for those rebel artists who defended feeling and expression in the face of reason, the fundamental self in the face of the universal, the creative in the face of imitation, sketchy,imprecise works in the face of the perfect, closed ones; and shadows in the face of light. In his context, Goya was the insistent gadfly who, despite his liberal and enlightened roots, never hesitated to descend into the infernos of the individual and of society to uncover their iniquities and abjections. His art was appreciated as a manifestation of the sordid, terrible, extravagant, exotic, grotesque, popular, fantastic , uneasy and exasperated. And Goya himself was appreciated-by Baudelaire, for example, in Qyelques caricaturists etrangers2-as a demiurge who created credible monstrosities with beastly faces and diabolical grimaces that were profoundly human. As a result, the works from his early period-when he had not yet begun to narrate and dissect reality with his brushes and burin, when Church and State, as well as the Academy's traditions and canons of beauty, were still firm values, despite their obvious breakdown and exhaustion-were buried, if not entirely lost, under the artistic magma of the final decades of the eighteenth century. That period was traditionally considered a lesser, and even insubstantial part of his artistic career. No account was taken of the fact that the Goya of the Caprichos, Desastres and Disparates, the Goya who wore away the barriers between religion and ideology, converting social morals into individual ethics, was none other than the Goya who studied with Italianate masters and echoes of France in Zaragoza. And it is impossible to understand one without the other. This youthful Goya is the painter who sought the recognition of Madrid's artistic and political officialdom, a young man of twentythree or twenty-four who, between May or June 1769 and February or March 1770, travelled to Italy to take part in the great liturgy of Roman art, living--or at least subsisting--in that place of unexpected encounters, that constant carrousel of ideas that was the papal capital throughout the Settecento, and even more so, in the second half of the century. Along with his early training in Aragon at the workshop of Jose Luzán, and what he received in Madrid, probably from Francisco Bayeu, Goya's initial creative universe was shaped by Rome, a city of contrasts filled with artists from every corner of Europe, where the regenerative power of the past combined with the cultural intermingling of the present […]. (Joan Sureda, «Goya & Itañy: From Hannibal to Los Caprichos»).